I've been off LJ for a while (I'm on Google+), but I have some friends in Denver that I only communicate with via LJ.

I will be in Denver arriving Sunday afternoon, and leaving Friday night the week of Dec 18-24.
I would like to have dinner and conversation with friends as many nights of that week as can be arranged.
If you are interested pick a night and a place. If you get me first, I'm yours that evening.

I am very tired of having to delete spam from my more popular posts here, so I have disallowed comments from anyone but friends.
I am also going to let my account lapse into an unpaid account, so I will have fewer avatars on display, and who knows what other changes in service.

LJ was good. I'm not really using it anymore, or taking the time to maintain it.

Every week or so, I get an email about some spammer or another adding a comment into one of my LJ posts or another.
I'm not posting here very much, but I have changed things to require the use of a CAPCHA to respond to my posts. Since I'm not posting much, this shouldn't be trouble for anyone I know.

I am posting on Google+ these days... mostly science type stuff. Quirky personal observations are going on Facebook. There is no place that I'm writing what I used to write on LJ concerning my personal life, but I think that is also moving to G+ now that I'm figuring out how to work the circles better.

We had video cameras at the two i Sebastiani shows at Pennsic this year, and I grabbed several screen shots from the video for the sake of putting together a new i Sebastiani website... The old one is almost a decade old now... and I need to learn the current web technologies at the grass roots level.

These are from a show about getting blown off course in the age of exploration.

And these are from a show about an elder statesman's impending visit.

It was fun having a so many images to choose from. Normally snapshots from a play get people 1.5 seconds after they've had a great facial expression, or posture.

I'm getting ready for Pennsic. Since I'll be in Chicago next week, this weekend is my last chance. 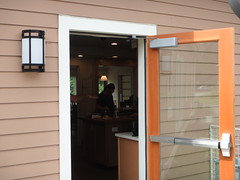 To the left I've got an image from my normal camera. To the right is a frame from the video camera I'll be using for closeups of the commedia shows, taken from the same place a few seconds later. I'm happy with how it handled the backlit subject in a dark place.

Here are links to the shots and others.

Mildly related sidenote: Livejournal let's me format my posts much more nicely than Google+ can (so far). The above is an example of something G+ doesn't make possible.... however, I am doing more of my bigger-than-FB posts on G+ these days. I currently have a few times as many contact/followers on G+ as I have active on LJ. I don't know if this link works for non-G+ members, but try it. I'm probably stopping LJ altogether before autumn 2011.

I haven't been posting much anywhere. I'm kind of settling into to how Google+ plays into my new MO.
I may drift toward putting my introspective stuff here, and using G+ as a more wordy form of FB. I am feeling like I don't want to pollute my Astronomy posts to my astronomy circle with all my other stuff... but the astronomy stuff is my most popular public info.

I wish there was a way to exclude groups from the following list for certain posts, short of having an everybody but list. 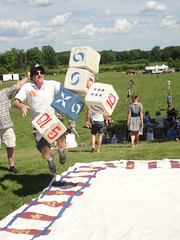 Here are some pictures from the last week and a half, but almost all were taken today.

This last week, I was teaching via WebEx from my basement. I have some issue with the built-in camera in my laptop, but it is basically going OK. One downside so far is that I have been getting close to zero exercise. I go to the basement, and come up for air.

But yesterday and today, I made a lot of progress on both big things and niggling tasks.

Finally, today, the family and I saw the final Harry Potter movie. I took off immediately after, so I didn't get feedback from the kids about how they liked it, except that Piper wants to see the upcoming Sherlock Holmes movie.

The Green River Festival was fun. It was $55 to get in, and there were a long series of bands playing on three different stages. I was mostly at the Cosmic Wimpout tent, video-recording, and playing games with new people, and experienced folks as well. A good time was had by all... also, there were hot air balloons.

I'm busy. Work is keeping me busy. My hobbies are keeping me busy. I've been home a lot, and not taking as many pictures as usual. I've been gearing up to do more with video, and because I've been at home, have felt more empowered to make progress. Some of my parts (cables, lenses, and such) are still in the mail.

One of my work things is I'm reading about Star-schema data-warehousing this week, and doing some labs/tutorials on the subject.

The net result has been not much writing to LJ.

Speaking of which... I had been looking at Dreamwidth conversion, but now I'm waiting (no hurry) for a Google+ invite so I can see if that would suit my needs and desires instead. 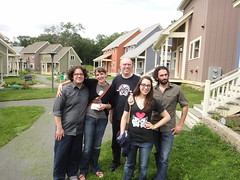 Here are a bunch of pictures from the last week or so.

It's been a busy several days, including, a trip home from San Francisco after visiting with Neil and Cara, then a week of working in Boston, and then my brother's wedding in Connecticut, a trip to Providence with Josiah to see some improv shows, and finally on Sunday, PGraph, a very talented hard-working bunch of improv people from Austin came by and helped supply ideas and stagecraft to the troupe for the Pennsic shows. Good stuff all around.

I had a few other things going on too, plus this week is my first week of running virtual classrooms for training. Hopefully I get the hang of it very quickly. So far, this approach seems to make it hard to be charming.

The Subject line is a Futurama reference. This week will have a new episode! First in a while, hopefully brilliant.

Other good news:
- Parallelogramophonograph will be in the Boston/Providence area this weekend. This is an improv group famous for doing long narrative improv from stock characters... and including some of the owners of the Hideout Theater in Austin Texas.
- My younger brother is getting married Friday.
- Denise gets to see some Indie band she sponsored in a live show on Saturday
- Summer starts in a little over two hours
- A recent study using high resolution interferometry techniques have determined a lot of specific details about the Cygnus X-1 System... something that was a big mystery when I was in college. It is a black hole with a mass of 14 Solar masses, orbiting a giant star with a mass of 19 solar masses, about 1860 parsecs from here. Lots more details where that came from, but that's the overview.
- In spite of heavy use of the disabled list, the Red Sox had another high scoring game last night. Can they do it again tonight? ... also, Wakefield will be going for his 198th career win in Pittsburgh against the Pirates (his original team) this weekend.
- July 2nd will be something of a family reunion in Southern ME, celebrating my Cousin Kathy's son Dylan's last few days before Navy basic training.
- I like the results from my new video camera.
- This week's class is going smoothly (so far, knock on wood, etc.)
Collapse